Can the Aircraft Carrier Survive the 21st Century?

Can the Aircraft Carrier Survive the 21st Century? 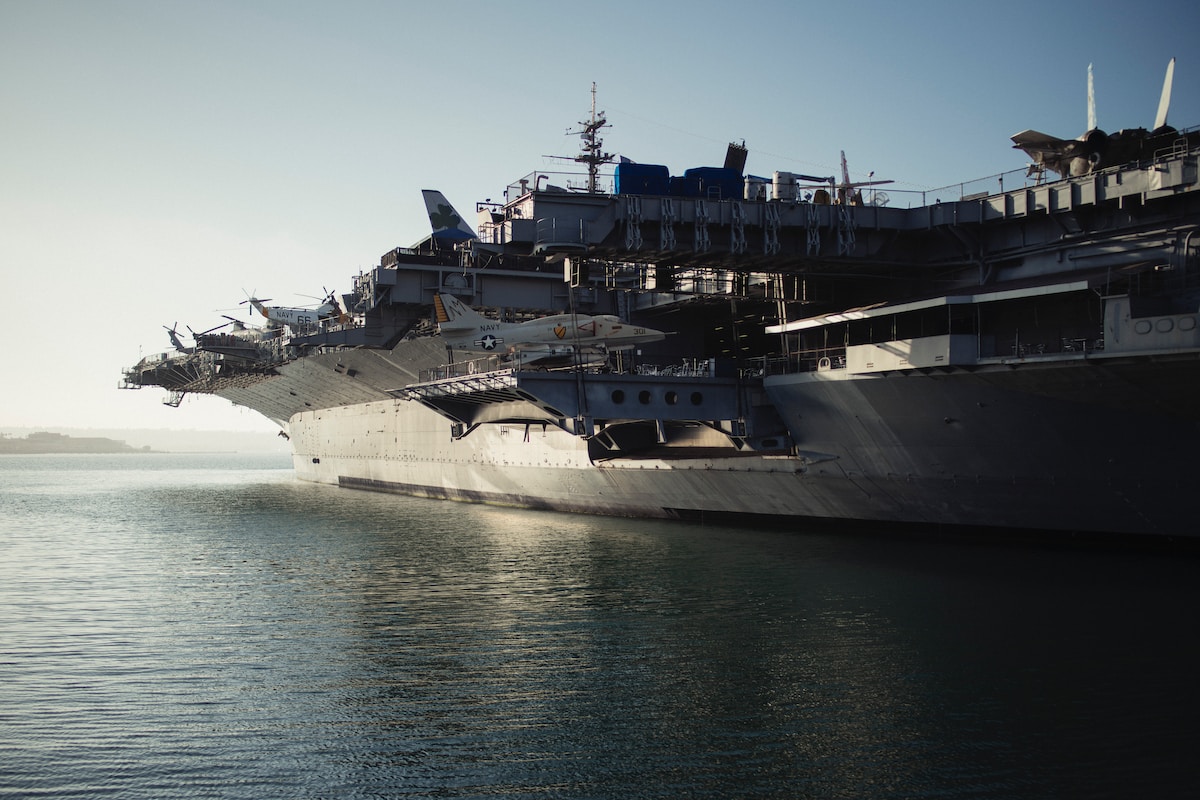 Can the Aircraft Carrier Survive the 21st Century? Untethered by Allegiance to Past Precedent. April 1862, eastern theatre of the U.S. Civil War. Professor Thaddeus S.C. Lowe, an acclaimed Union inventor and scientist, lifts off in a gas-filled balloon from the deck of the coal barge USS George Washington Parke Custis to conduct reconnaissance on the Confederate position in southeastern Virginia as part of the Peninsula Campaign.

Professor Lowe didn’t know it at the time, but his use of a ship’s deck as a launch site for aerial war machines would be the focal point of warfare innovation for the next 150 years. This resulted in the use of balloon carriers in the late 19th century and seaplane carriers with flat decks during the First World War. WWII saw the carrier come into full form as we recognize it today, the centerpiece of an attacking naval fleet launching full-size propeller, and later, jet-fueled fighters.

With all of this innovation, the original purpose of expanding the visual battlefield and projecting air power great distances offshore has remained. However, as we progress in the 21st century with increasingly less secure open-ocean waterways for transit and new subversive abilities for countries to export power, can this original mission of the carrier justify its continued existence? After having the fortunate opportunity to interview retired Rear Admiral Scott Sanders. Sanders is a 1980 Naval Academy graduate and 33-year naval officer who specialized in Naval Aviation on the state of the aircraft carrier, I reflected on how the carrier’s role will have to change in the near future. 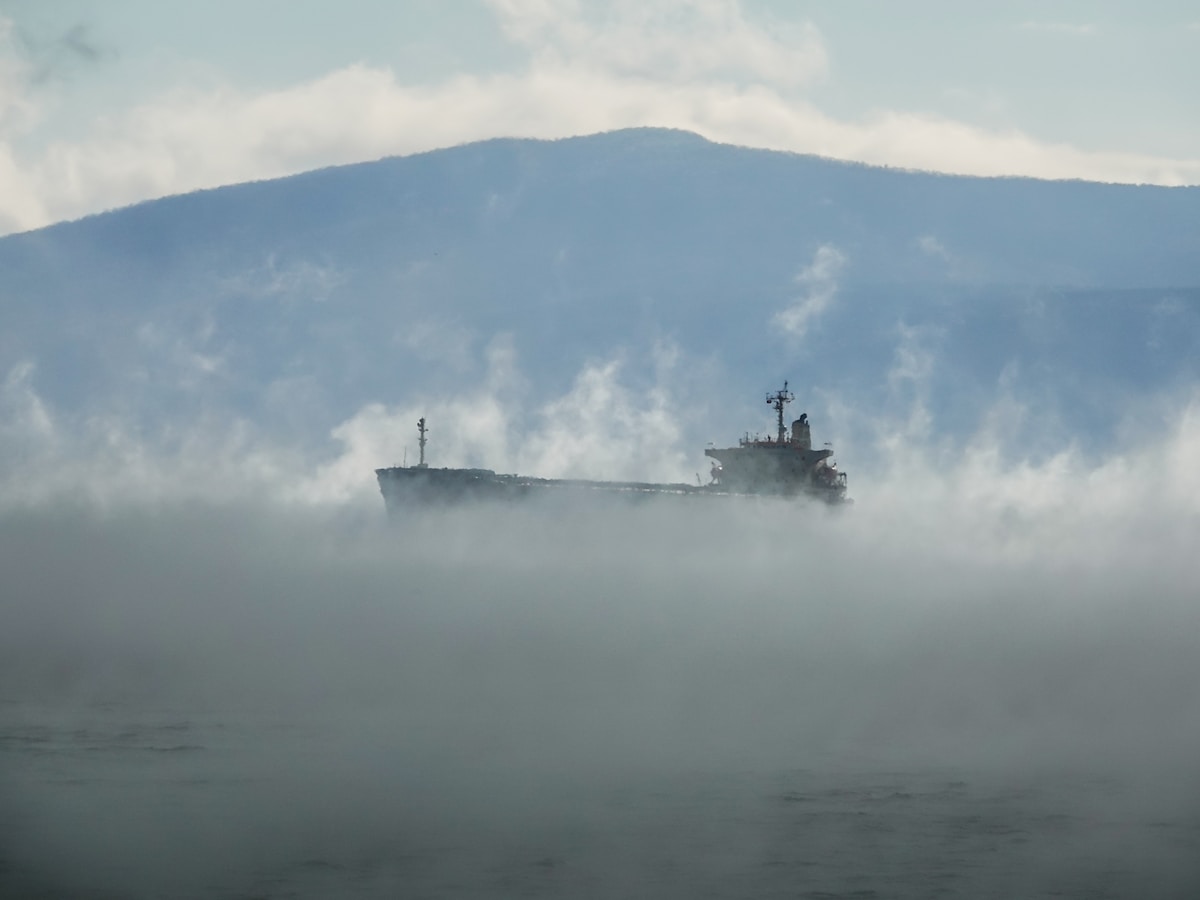 Before WWII, competing colonial empires ran the world with no international body to resolve military and economic conflicts. These empires heavily depended on their navies as attacks on the open waters were not uncommon. Since the end of WWII, the U.S. has had uncontested access to the world’s oceans, securing trade routes from pirates and other threats. Admiral Sanders notes that since most European countries and Japan were financially devastated in the wake of WWII, the U.S. found itself in a bipolar world competing with the Soviet Union. The U.S. had most of the world’s gold reserves and its entire economic infrastructure still intact.

With this newfound military and economic supremacy, the U.S. began to buy off the rest of the world against the Soviets. These buy-offs included rebuilding West Germany, funding NATO, and defending the Indo-Pacific region against Soviet territorial expansion. The American effort was successful as the U.S. made the open oceans secure for commerce over the next several decades. While carriers were the centerpiece of WWII naval attack formations, carriers in the post-war era were used as intimidation pieces to prevent war and as symbols of national power projection. This resulted in a flourishing international economy where trade ships saw very few threats on the seas. As more U.S. production began to move to China over the last 30 years, China did not require a strong navy to protect its commerce across the Pacific. 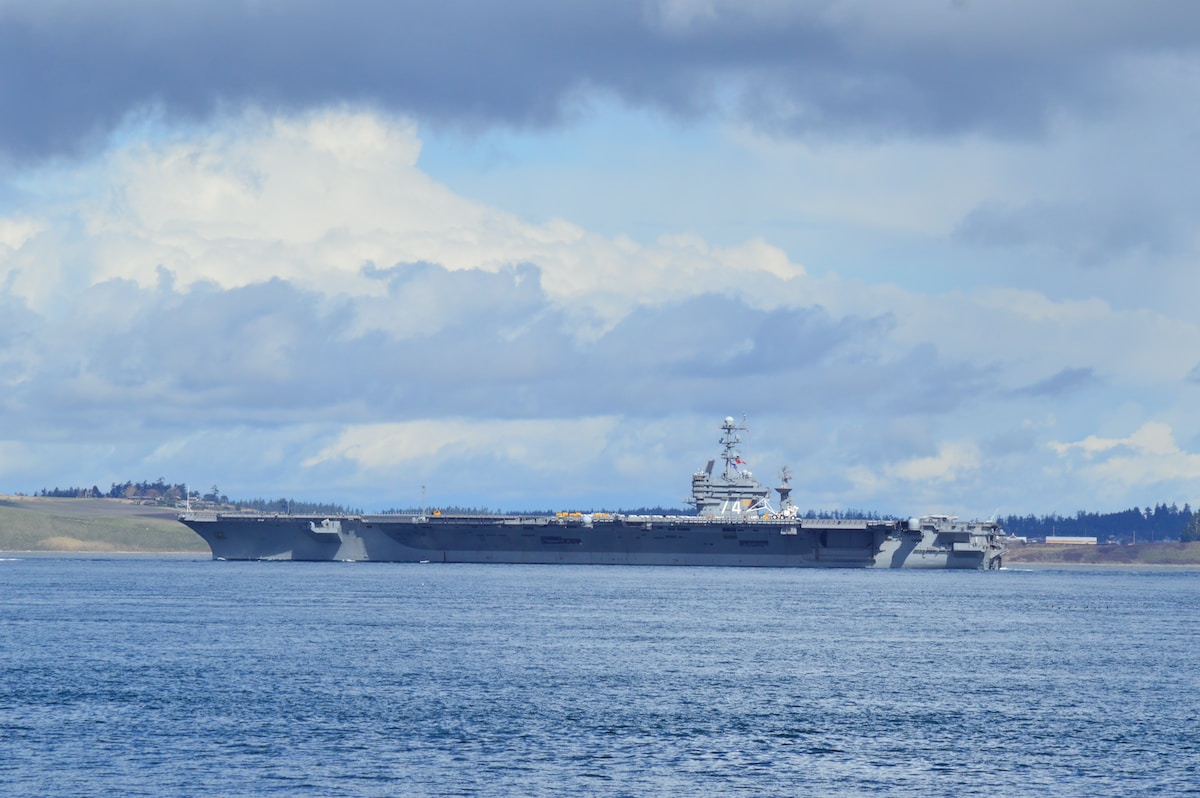 However, in response to growing threats on the seas, China has expanded its naval might over the last ten years. It is clear that China now feels that the U.S. is not asserting itself at sea as it had over the past half-century. Without the same U.S. military might overseas, is the intimidation use of carriers obsolete? This conventional view of safe waterways guarded by the unchallenged U.S. Navy is becoming blurred. The U.S. is pulling back from patrolling open waters amid the calls for “less foreign wars” by an American public weary of bloated defense spending.

With the rise of China’s navy, increasing pirate activity in the Strait of Malacca and off the coast of Somalia, and the fall of Afghanistan to the Taliban, we can expect the world to be less secure in the short term. We’ve seen glimpses of these threats to the world’s waterways as a result of the U.S. reducing funding to protect the rest of the world. With this pullback, the carrier is losing its role of patrolling the waterways and intimidating adversaries to international trade. With the last large-scale maritime war occurring in the 1940s. In addition, to the remarkable advances in technology since then, “a less formally ‘capable’ adversary untethered by allegiance to past precedent may be more flexible and therefore much more dangerous”, especially in its use of aircraft carriers. 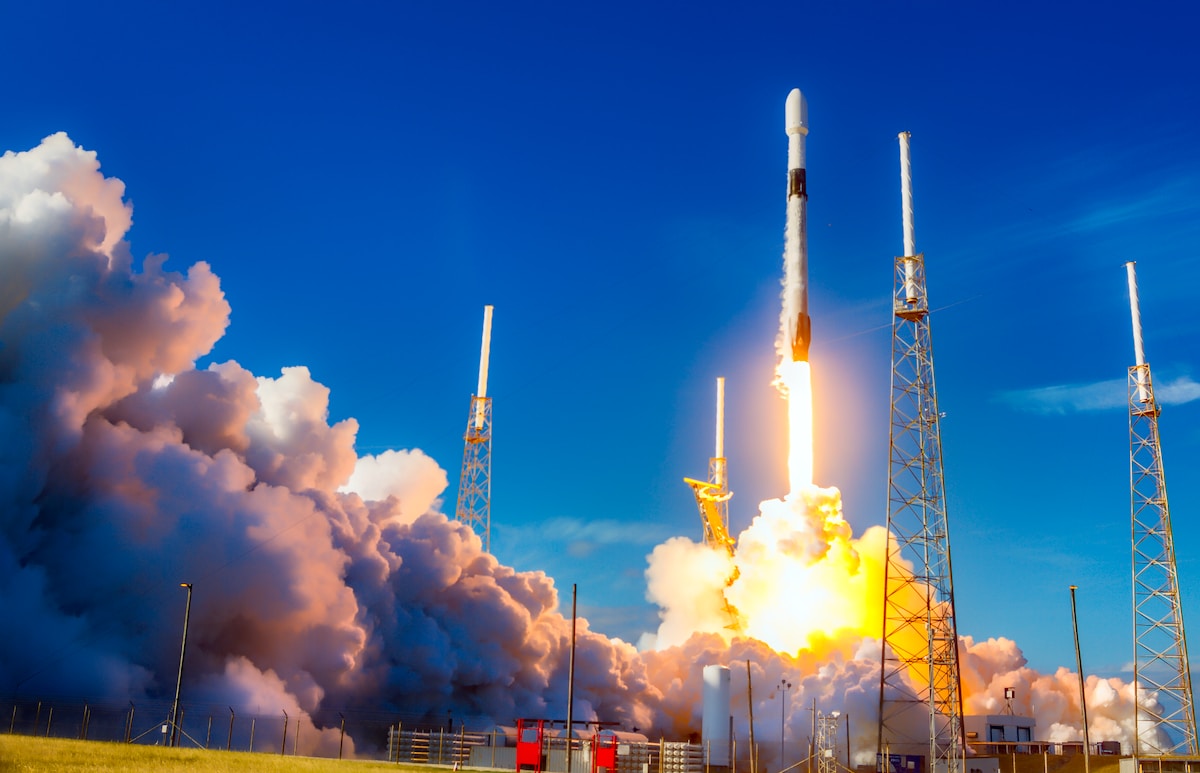 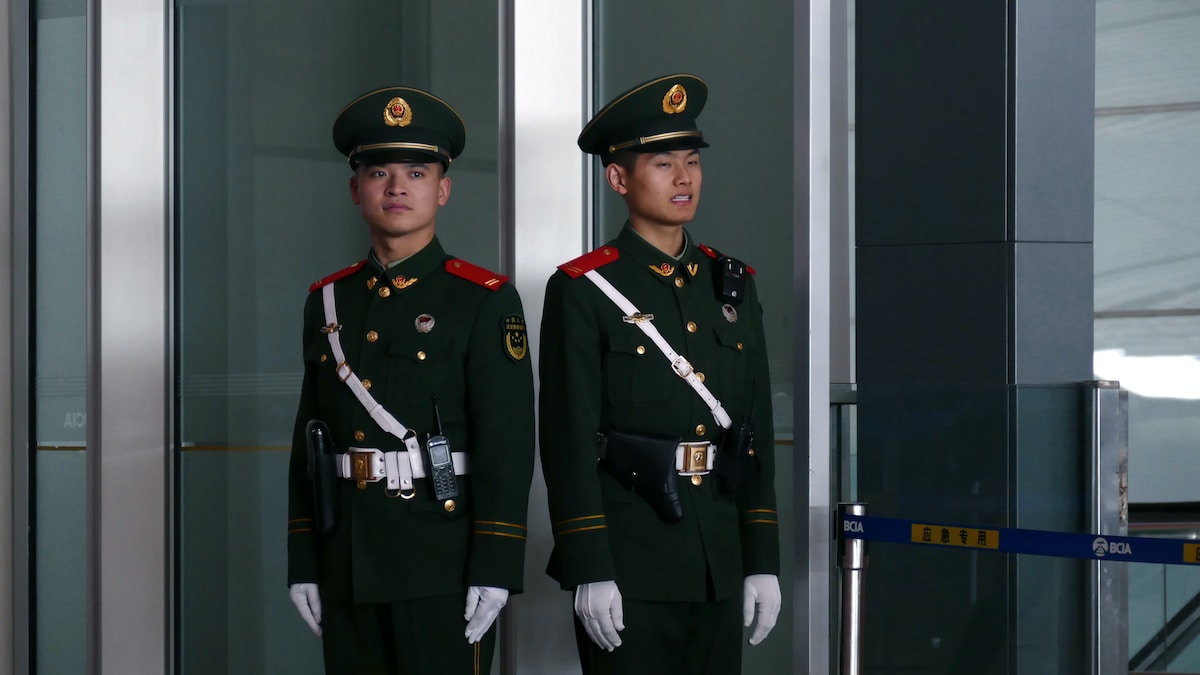 It is evident that the aircraft carrier’s intimidation level is becoming less potent. China’s aggression has coincided with this pullback, even though the nation is vulnerable on the seas as a main exporter. China needs freedom of the seas and the ability to import oil through the Strait of Malacca. The Strait is a strategic chokepoint connecting the Indian Ocean with the South China Sea.

China knows that they could be cut off in a matter of days. This was evidenced by a “meeting of the minds”. One between Japan, Australia, India, and the U.S., on how they would blockade the Strait of Malacca.

Moreover, China’s economy would halt in a matter of days, yet is still emboldened to continue its expansion aggression. This expansion includes subverting populations in the South China Sea. In addition, overseas through media and propaganda, how can the carrier deter this type of aggression?

Thinking through how China would take over Taiwan. It is likely that instead of a conventional amphibious invasion. China will try to get Taiwan through subversion and coercion of its culture and politics. If the go-to strategy to annex a country is subversion of its people and systems. What role does the aircraft carrier have in this scenario? Furthermore, or more broadly, in a less secure world?

As a preview, China is already exploring new approaches to the carrier in recent years, mainly in the South China Sea. The nation is creating artificial islands in essence as “stationary aircraft carriers” for territorial claims. 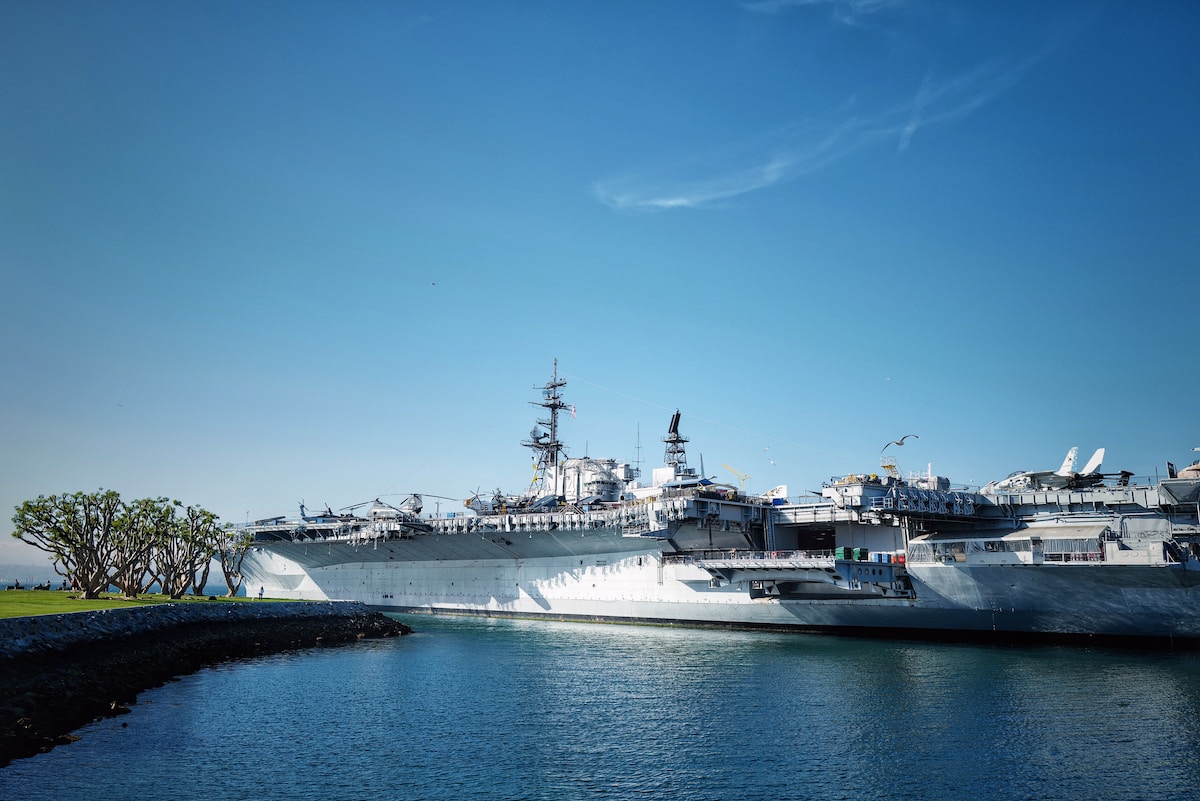 The original mission of the aircraft carrier to project power overseas and expand the visual battlefield met the demands of the increasingly mechanized world of the late 19th and early 20th centuries.

The U.S. Navy's ability to project power across entire oceans with aircraft carriers created an era of safe waterways after WWII. This allowed for international trade to flourish. For decades, other emerging powers, such as China, did not have the need nor the urgency to have strong navies. It simply did not serve its economic and strategic interests at the time.

However, these global waters are becoming increasingly dangerous. This raises the question of whether the aircraft carrier can continue to provide value to naval fleets. Moreover, in a world that is becoming speedily more cyber with media and propaganda having an unlimited range of influence.

Just as Professor Thaddeus S.C. Lowe adapted the deck of a coal barge to launch his spy balloons for the first time 160 years ago. The U.S. may need to approach the role of the aircraft carrier completely independently of its precedent use during WWII. To best see how the carrier can be effectively utilized in this increasingly cyber and ideology-driven world.

Subscribe
Previous
How to Evaluate Unconscious Cognitive Bias at Work
Next
F-14’S Supersonic Flight & Top Gun With US Navy Commander...
Return to site
All Posts
×