Legacy Of The USS New Jersey : An American Legend Seen Through The Eyes Of Her Curator, Ryan Szimanksi

Legacy Of The USS New Jersey : An American Legend Seen Through The Eyes Of Her Curator, Ryan Szimanksi 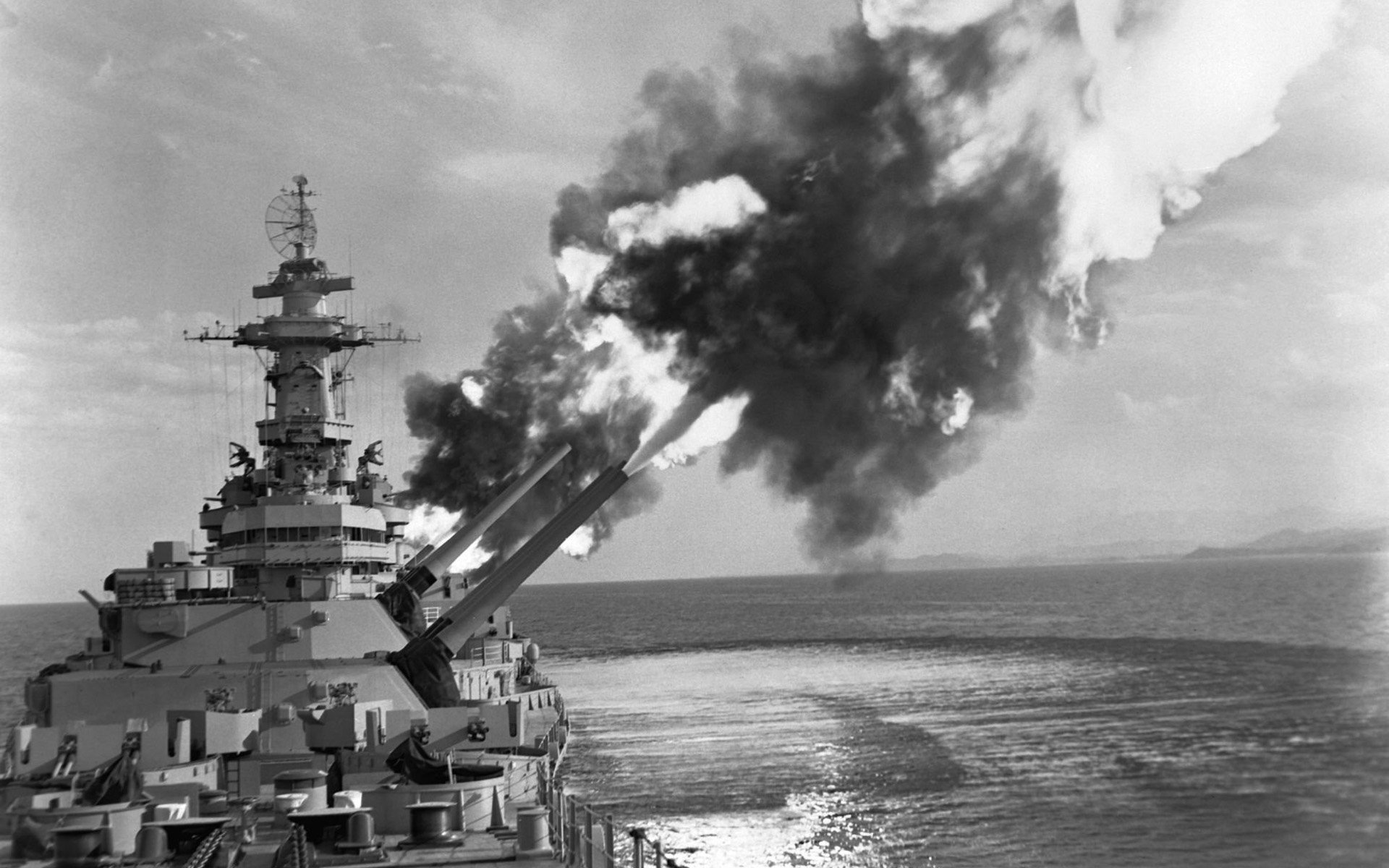 Legacy Of The USS New Jersey : An American Legend Seen Through The Eyes Of Her Curator, Ryan Szimanksi In the port of Camden, New Jersey floats the most decorated battleship in US Naval history. At nearly 900 feet long, the USS New Jersey’s expansive deck and lower levels were once occupied by countless men of the Navy dating as far back as World War II. From clashes with Japanese warships on the Pacific Front to intense bombardments in the Korean War, from engagements on the Vietnam coast to fire support off of Lebanon, the New Jersey has seen some of the largest conflicts of the 20th century. Rebellion Research sat down with Ryan Szimanski, curator of the USS New Jersey and Executive Director of the Historical Naval Ships Association, to explore the storied ship’s history.

Ryan in various parts of the USS New Jersey

The USS New Jersey was laid down—a process in which Congress authorizes the vessel’s development and construction begins—in 1940 in the context of escalating global tension. The government’s estimation proved to be correct, as not long after the United States was dragged into the Pacific Front and would need to leverage strong naval forces. A multiyear ship building process then began, and at last in 1943 the New Jersey was commissioned by the United States Navy.

Before long, the newly minted ship found itself in a battle at Truk Lagoon. An atoll just off of New Guinea, Truk was a Japanese naval base so critical to their operations that some historians call it Japan’s Pearl Harbor. Seeking to cripple Japan’s capabilities in the South Pacific, American forces ambushed the stronghold in 1944. Weakened and damaged by air attacks, the Japanese ships departing the base were pursued and sunk by American warships, including the USS New Jersey. This conflict marked the only time in history that an Iowa-class battleship has used its guns for fighting other warships.

One quirk of the World War II Navy was that for each fleet there were two admirals. Typically, in the present day one admiral commands two to three fleets. This means that for each fleet the admiral is controlling, there are one or two fleets being maintained or repaired back home. What made World War II’s Navy unique, however, was that a team of repair ships would accompany a fleet and make repairs on-the-fly. This allowed the admirals to take turns commanding the ship, with one admiral going back home to draft plans for the next campaign and the other in charge of the active fleet. This strategy even deceived Japanese into thinking the United States had twice as many ships as it actually does.

After the successful battle at Truk Lagoon, Admiral William Halsey took over the fleet and Spruance was rotated off. Halsey was in charge when America, shortly after invading the Philippines, joined The Battle of Leyte Gulf in October 1944—the largest naval battle of World War II. As Ryan Szimanski explains, a fleet is typically kept together and travels together. At Leyte Gulf, however, the Japanese naval forces split into multiple groups across the Philippines.

In particular, Halsey centered his sights on a group of aircraft carriers on the northern side of the islands, taking his fleet there to sink them despite recommendations to the contrary. Unbeknownst to him, these ships were bait and the Japanese battleships sneakily made way for the invasion beaches now that the American fleet was diverted. Suddenly, Halsey was forced to turn around mid-way and head back to the beaches. As a result of this misstep, the smaller American ships left behind bore the brunt of the naval fighting, and the USS New Jersey spent much of its time traveling rather than in action.

Despite the mistake, Leyte Gulf ended in America’s favor. Halsey then sailed the ships toward home. On the way back, however, Halsey ran into a typhoon which he severely underestimated. Halsey’s recklessness proved tragic, as 790 sailors died and 3 destroyers sank in the violent storm. For the foolish mistakes he made during his tenure commanding the Third Fleet, Halsey was investigated by the Navy but eventually absolved of any wrongdoing.

At last, Spruance sprung back into action and was rotated in as admiral of the fleet (which was renamed the Fifth Fleet when under his control). Under his leadership, the New Jersey was used as fire support in the critical invasions of Iwo Jima and Okinawa. Plans were in the making to invade Japan itself with the help of the New Jersey, but shortly after the dropping of atomic bombs Little Boy and Fat Man on Hiroshima and Nagasaki Japan announced its surrender.

Following the announcement, USS New Jersey was ordered to stand by in the Philippines just in case there was any unrest or problems. At this point, many members of the Navy expected the surrender to take place aboard the New Jersey because of the many honors it received during the war. In a sudden turn of events, President Truman—himself a native of Missouri—selected the USS Missouri for the surrender. An unverified tale told by New Jersey crew members is that when asked for paint by the Missouri for some pre-surrender touch ups, the frustrated shipmen dumped all the paint they had into the sea.

After World War II, the USS New Jersey was mothballed—a way of preserving ships in the Navy that involves coating them in oil and sealing openings.

Then, in 1950 the Korean War started and the USS New Jersey was reactivated. In the war, it served as the flagship for the entire 7th Fleet under Admiral Jocko Clark, the first Native American admiral. Throughout the war, the New Jersey provided gunfire support to ground troops on the coastline.

After the end of the Korean War, the New Jersey saw use as a training ship for much of the late 1950s. At last, all Iowa-class battleships were taken out of service and for the first time the US did not have an active-duty battleship.

This period of dormancy didn’t last for long, as the United States soon found itself in another conflict: the Vietnam War. Many of the conflicts in the Vietnam War involved either ground or air troops, and ships initially saw very limited use. Realizing that North Vietnam had the world’s best anti-air batteries, American military command brought out the USS New Jersey in 1968. In Vietnam, the New Jersey was the only battleship brought back. It served as highly effective naval gunfire support, and with a capacity of 2000 men, was utilized as a floating hospital and place for troops to get some food, rest, and a hot shower. The ship’s service didn’t last long, for after a year it was taken out of service and yet again mothballed.

Then, during the Reagan presidency in 1982, USS New Jersey was once again awakened from its slumber. During this period of its life, the New Jersey was renovated and reequipped with Tomahawk missiles. Thanks to its large deck space, the ship was able to keep its old 16-inch guns and also add this new weaponry.

The ship floated around the Pacific Ocean, performing training exercises. Then, following the high-profile devastating bombing of a marine barracks by Lebanese insurgents, the New Jersey cruised to the coast of Lebanon. There, it used its mighty guns to wreak havoc on the coast of Lebanon in the midst of the Lebanese Civil War.

To date, the Lebanese Civil War is the last conflict the USS New Jersey has served in. In 1999, the government sought to dispose of the ship. Thankfully, the State of New Jersey offered to take in the ship. It was thus preserved and then turned into the museum it is now today.

These days, the USS New Jersey is part of a global network of over 200 museum ships. Though the Covid-19 epidemic initially resulted in its temporary closing, the USS New Jersey is now fully open. Onboard, visitors can go on in-depth guided tours with Ryan Szimanski, explore the museum’s many exhibits, or even view fireworks from the deck on holidays like July 4th.

Legacy Of The USS New Jersey : An American Legend Seen Through The Eyes Of Her Curator, Ryan Szimanksi Written by Ryan Cunningham

Subscribe
Previous
4Front Ventures (OTCMKTS: FFNTF)
Next
The Curse That Causes Promotions to Fail
Return to site
All Posts
×