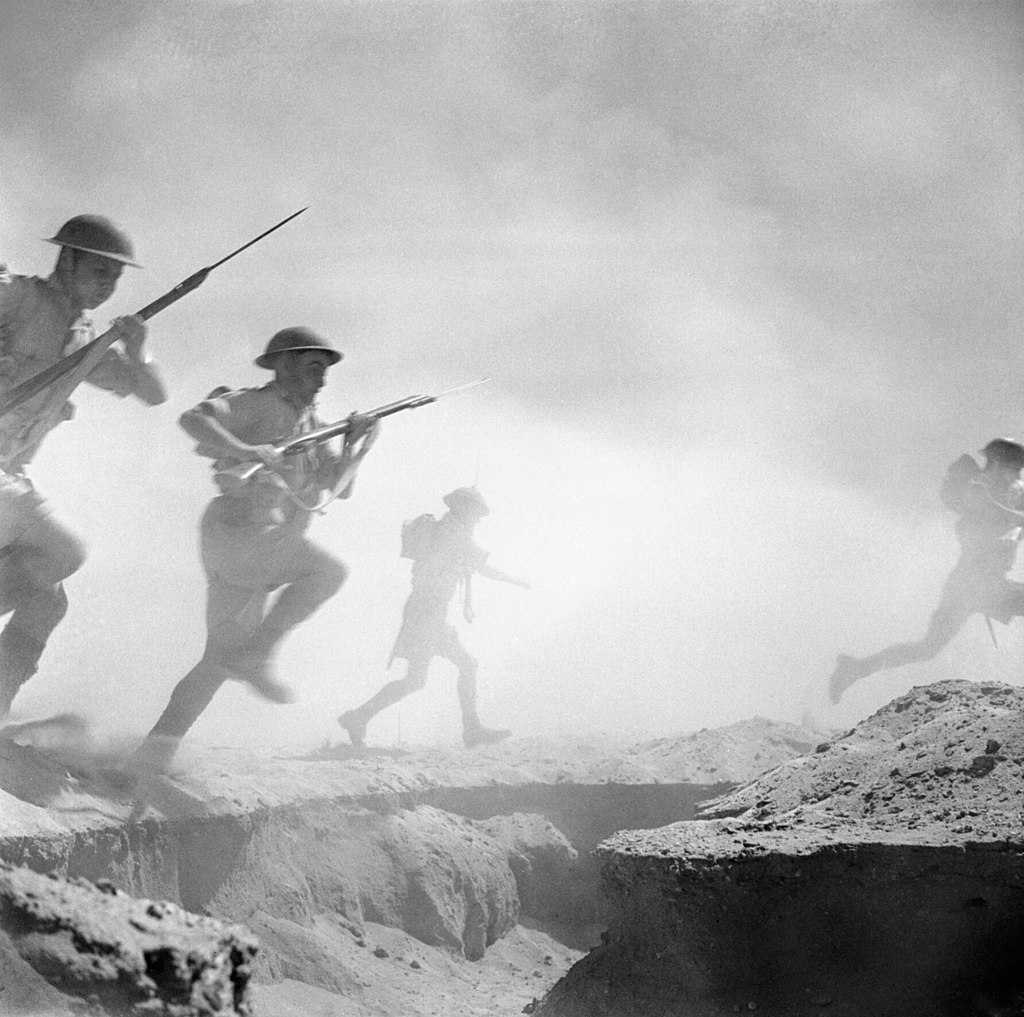 Second Battle of El Alamein On October 30th, the Australian 9th Division broke the German lines and moved to block the coastal road, at a railway halt called El Alamein, some 60kms/100 miles west of the Egyptian city of Alexandria.  In so doing the Aussies cut off several of Field Marshal Erwin Rommel’s Afrika Korps divisions, and set-up the first great land victory of British and Imperial forces over the Germans.

The battle, which subsequently became known simply as ‘El Alamein’, took place between 23 October and 11 November, 1942, and began a rout of German and Italian forces in North Africa that ended with the latter’s surrender to the British at Tripoli on 12 May, 1943. 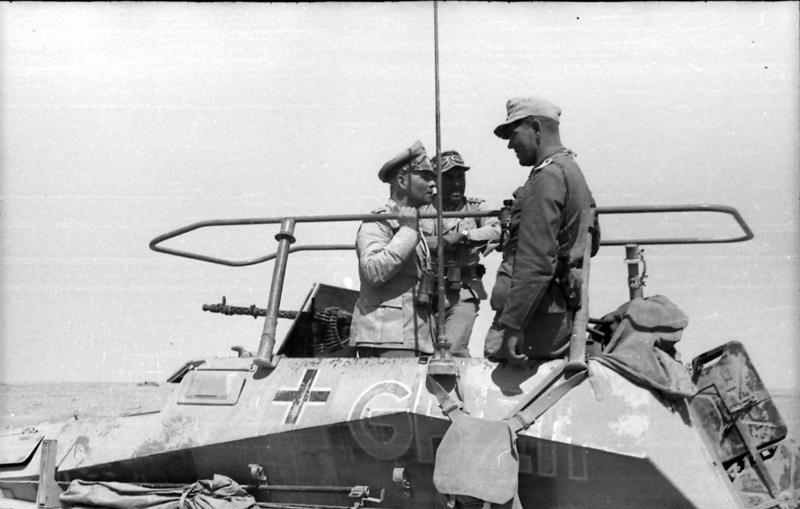 The 9th Division formed part of the British Eighth Army, under the command of the then General (soon-to-be Field Marshal) Bernard Law Montgomery. On 23 October, 1942 the ‘8th’ had a strength of some 195,000 personnel and 1,029 tanks.  This compared with an Axis force at the very end of its supply lines, and with little or no air cover, with a strength of 116,000 personnel, plus the 547 tanks of Panzerarmee Afrika.

On the night of 23 October a heavy British artillery barrage, supported by air power hammered the Afrika Korps and their Italian allies before British, Australian, Canadian, Indian (including personnel from what in 1947 became Pakistan), New Zealand and South African forces launched the ground offensive. In what in many ways was a classical set-piece World War One assault Montgomery had planned a three-phase battle: the break-in, the main fight, and the break-out. However, determined counter-attacks by Rommel’s German forces and Italian paratroopers and other regular elements, soon turned the battle into one of attrition.

Over the next eleven days Montgomery, whose name became synonymous with this battle, struggled to break through. Finally, on 4 November, no longer able to parry Montgomery’s repeated thrusts along a battle-front that extended over some 60kms or 40 miles, and absent their sick leader Rommel, Axis lines broke.

Losses were relatively steep on both sides. British and Imperial forces lost 13,560 killed, wounded or captured, whilst Axis forces lost between 37,000 and 59,000. Even to this day the actual toll is unclear.

Critically, by the end of the battle the Afrika Korps had lost much of its armour, the once impressive Panzerarmee Afrika having been reduced to less than thirty tanks. Within days of the victory at El Alamein Anglo-American forces landed in Morocco and began the roll up of the Afrika Korps and Axis forces in North Africa.

For the British it was vital to win a significant land battle against Axis forces for the first time since the 1939 outbreak of the war. Indeed, with the Americans rapidly taking over the strategic direction of the Western war from the British, and with Stalin increasingly dismissive of British efforts, Churchill desperately needed a major victory to preserve at least a modicum of influence with Roosevelt and Stalin. El Alamein provided Churchill with just such a victory, even though by late 1942 it was plain to see that Britain’s power was waning fast and that it would be the Americans and Soviets who would henceforth call most of the strategic shots.

Amiens 1918 : The Birth of Blitzkrieg

Prior to El Alamein the campaign in North Africa had been a by then all-too-familiar story. Rommel and his German expeditionary force had arrived in North Africa in March 1941.

During the ensuing eighteen months Rommel’s smaller, but better-led and better-equipped force had military-strategically out-manoeuvred bigger, but often poorly-led and poorly-equipped British and Imperial forces. El Alamein changed that dynamic, even though it is hard to suggest the conservative Montgomery was ever the match as a commander of his more daring and creating German counterpart.

However, ‘Monty’ did the job because for the British the victory was particularly timely. By late 1942 the Royal Navy had effectively defeated the surface fleets of both the German Kriegsmarine and, of particular importance to the battle, the Italian fleet in the Mediterranean.

Ultimately, El Alamein was a victory of supply and re-supply, for which Montgomery’s superior General Sir Harold Alexander must take much of the credit.

In the wake of the victory of British-led forces at El Alamein the Western Allies began the long slog to eventual victory in 1945.  First, through Sicily, then onto the arduous campaign on the Italian mainland in 1943 and 1944, during which the Allies laid the groundwork at Salerno and Anzio for the critical D-Day amphibious assault on Normandy on 6 June, 1944.

There are also lessons from El Alamein for the defence and military strategy of today. Firstly, defence strategy that is not properly grounded in national grand strategy, i.e. the organisation of large means in pursuit of large, well-considered ends, and employed in properly-established and balanced ways, is but a meaningless waste of taxpayer’s money.

RAF Baltimore of No. 223 Squadron bombing El Daba airfield in support of the Alamein offensive.

El Alamein served a very clear strategic end, employed means to effect, in ways that eventually proved victorious. Secondly, military strategy that is not embedded in and conscious of a workable political strategy (and its context) is merely a waste of lives and materiel. El Alamein was essential to the ultimate success of West’s political strategy. Above all, El Alamein was proof of that age-old military adage: do what the enemy least desires, where and when he least desires it.

El Alamein is also testament to another military truism: decisive advantage comes only when the critical weight of mass, manoeuvre and mobility has been established. Military innovation, and with it new technology is important, but cannot act as a short-cut to such advantage. Today, British defence strategy is driven too much by the triumph of hope over experience. For example, a platoon will never do the job of a brigade, let alone a division, whatever cap badge is assigned to it.

British tanks advance to engage German armour after infantry had opened gaps in the Axis minefield at El Alamein, 24 October 1942.

A mine explodes close to a British artillery tractor as it advances through enemy minefields and wire to the new front line.

Without in any way denigrating the effort and sacrifice of the Aussies, Brits, Indians, Kiwis, Pakistanis, South Africans et al who fought at El Alamein there are also limits to the strategic importance of the battle.  Between August 1942 and February 1943 the Battle of Stalingrad took place, involved 2.2 million personnel, and saw between 1.7-2 million killed, wounded or captured. It is fair to say that the May 1945 defeat of Nazi Germany really began in the wastes, the meat-grinder, that was Stalingrad. Equally, El Alamein must not be under-estimated.

Taken together the two contemporaneous victories broke the myth of invincibility that the Wehrmacht had acquired. And, having already defeated the Italians at sea El Alamein critically gave the Western Allies undisputed control of the Mediterranean, and a base from which to launch one of the three-prongs from east, south, and west that would eventually bring the Reich to defeat.  In the wake of El Alamein Nazi Germany was trapped in a three-dimensional grand strategic vice between the Anglo-Americans, the Red Army and Western air power.

In honour of the men of ALL nations who fought and died at the Second Battle of El Alamein. Lest we forget.

Analyst, author, commentator and speaker with ten books to my name, including two for Oxford University Press (and about to publish my third for Oxford “Future War and the Defence of Europe), My job is to speak truth unto power in an age when the gap between power, people and politics is growing dangerously wide. My focus is the tension between strategy and politics with an emphasis on security and defence policy. My analysis is the product of many years policy and practitioner experience, allied to long and deep research. Sadly, I also support Sheffield United Football Club – the triumph of endless hope over long, hard, and painful experience!

2017: The Geopolitics of Terror – Demons and Dragons (Routledge)

2007: A Chronology of European Security and Defence (Oxford University Press)

Subscribe
Previous
What is the future for Russia’s troubled aircraft carrier?
Next
Central Banks Exacerbate Economic Imbalances
Return to site
All Posts
×