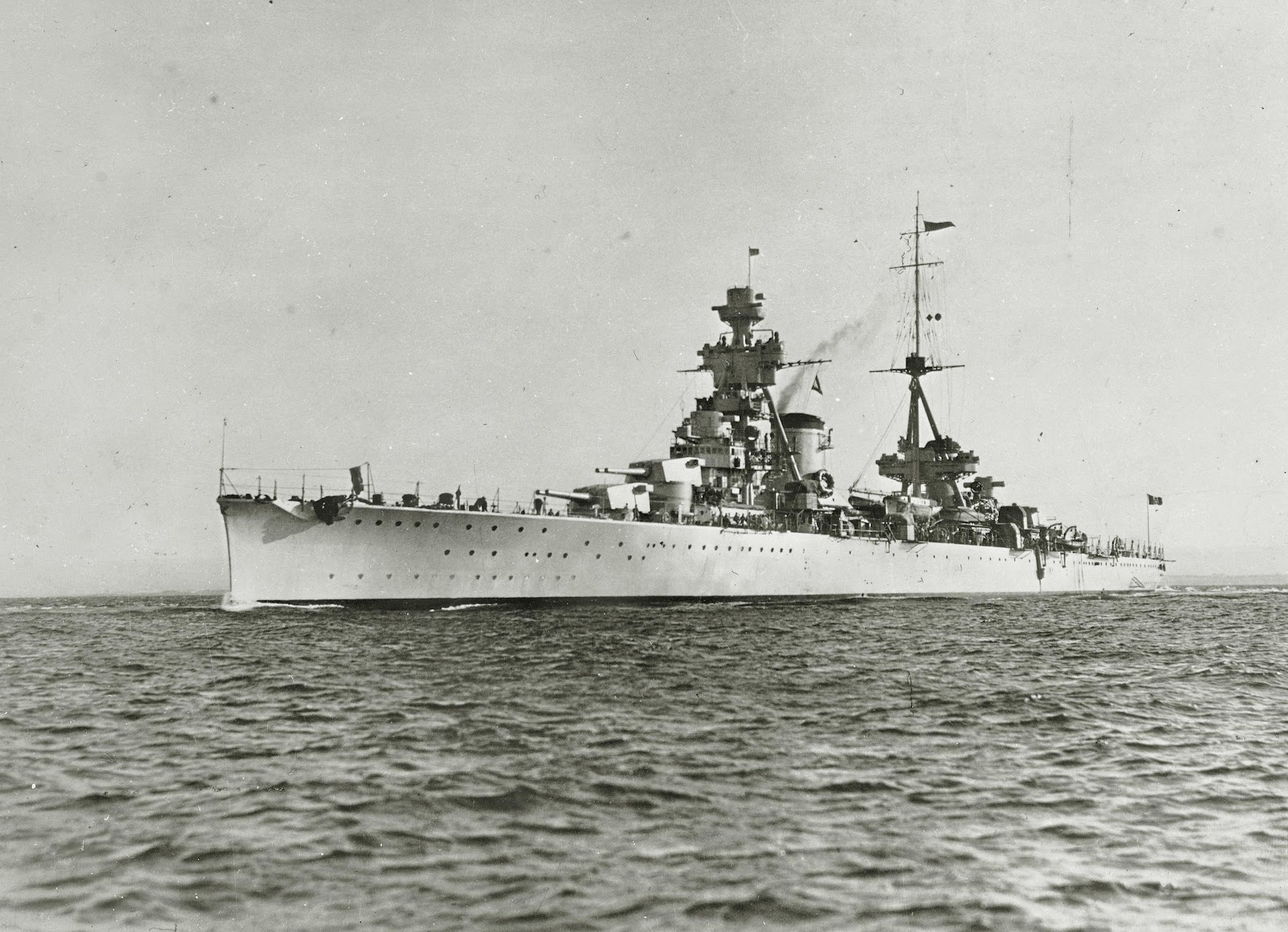 The Italian Cruiser Trieste On 10 June 1940, Italy declared war on Britain and France officially entering World War II. The heavy cruiser Pola replaced Trieste as the cruiser squadron flagship, which in turn became the flagship of the 3rd Division, which also included Trento and Bolzano.

These four cruisers deployed north of Sicily to patrol for Allied vessels on Italy’s first day of the war. 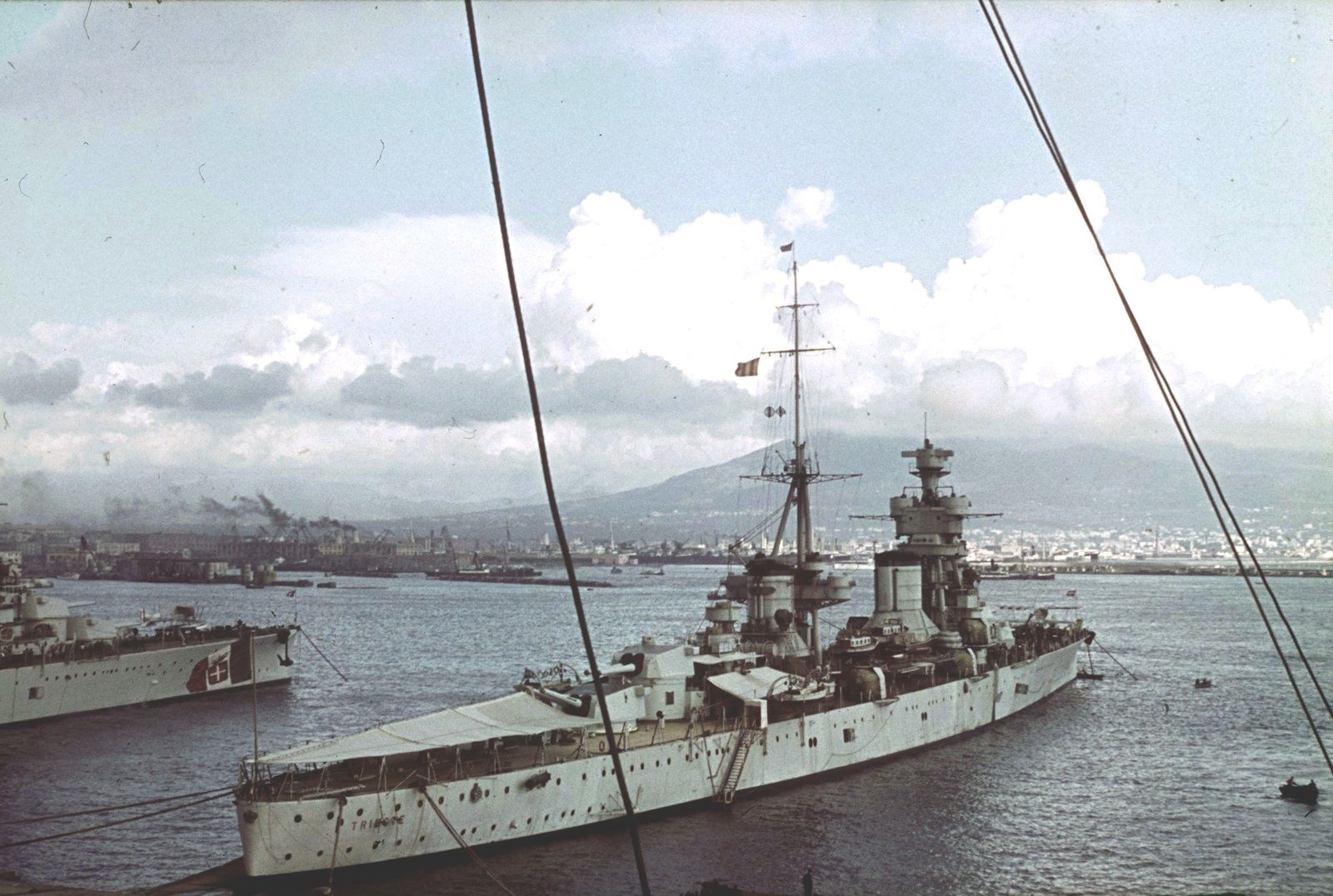 On the 31st of August, the 3rd Division sortied to intercept a British convoy that was headed from Alexandria to Malta in Operation Hats. The Italian fleet broke off from the operation as they couldn’t encounter the merchant ships. Trieste arrived back in Taranto on the 2nd of September. She was present in Taranto when on the night of 11–12 November, the fleet Air arm attacked the port in one of the most famous raids in World War 2, luckily she emerged undamaged.

Trieste sortied with the fleet on the 26th of November in an attempt to intercept another British convoy to Malta.

By this time, Trieste and the other heavy cruisers had already begun engaging their British counterparts in the Battle of Cape Spartivento, and had scored two hits on the cruiser HMS Berwick, the second of which is credited to either Trieste or another heavy cruiser.

The battlecruiser HMS Renown intervened, and quickly straddled Trieste twice, though she inflicted only splinter damage.

This forced Campioni to commit the battleship Vittorio Veneto, which in turn forced the British cruisers to break off from the action, allowing both sides to disengage.

On the 9th of February 1941, Trieste sortied with the rest of the 2nd Squadron to search for Force H, after Force H had just shelled Genoa. However, the Italians returned to port without success.

On the 12–13 March, Trieste escorted a convoy to North Africa.

On the 27th of March, the division sortied with the rest of the fleet for a major sweep toward the island of Crete.

An Ro.43 floatplane launched by Vittorio Veneto located a British cruiser squadron, and soon Trento and the 3rd Division had come within visual range.

Seventeen minutes later, the Italian cruisers opened fire from a range of 24,000 yards, initiating the first phase of the Battle of Cape Matapan; in the span of the next forty minutes, Trieste fired a total of 132 armor-piercing shells, though trouble with her rangefinders and the extreme range of the action prevented her from scoring any significant hits.

Later the Italian fleet commander, Vice Admiral Angelo Iachino instructed the ship’s to break off the action with the British cruisers and turn northwest, to lure the British vessels into range for Vittorio Veneto, Vittorio Veneto eventually closed the distance enough to open fire, prompting the three cruisers back to join the fight.

The 6-inch-gun-armed British cruisers were outmatched both by the Italian heavy cruisers and Vittorio Veneto, and they quickly reversed course.

While the two sides were still maneuvering, a group of British torpedo bombers from Crete arrived and unsuccessfully attacked Trieste and the rest of her division shortly after more attacks from the aircraft carrier HMS Formidable convinced the Italians to break off the action and withdraw.

Later in the day, Vittorio Veneto and Pola were torpedoed by British aircraft, pola being left dead in the water. Trieste, Trento, and Bolzano were also attacked by aircraft, but they escaped without damage. Trieste reached Taranto in company with the damaged Vittorio Veneto later the following day. In the meantime, Pola and two other Zara-class cruisers were destroyed in the night action with British battleships late on the 28th in the Battle of Cape Matapan.

From the 24th to 30th of April, Trieste and Bolzano escorted a convoy to North Africa.

A presence of British warships forced the convoy to shelter in Palermo, Messina, and Augusta in Sicily before being able to make the crossing to Tripoli.

A month later, the two cruisers covered another convoy for the return leg of their voyage, the ships joined a second convoy also returning to Italy. Another convoy made the crossing on 8–9 June, again escorted by Trieste and Bolzano, along with the destroyers Corazziere, Ascari, and Lanciere. Trieste and the heavy cruiser Gorizia and the vessels of the 12th Destroyer Squadron covered four ocean liners that had been converted into troopships on 25 June, heavy British air attacks that night forced the convoy to return to Taranto.

A second attempt was made on the 27th of June, and the ships successfully reached Tripoli on the morning of the 29th. Heavy air attacks targeted the ships while they were unloading the following day, but the ships were able to complete the task, depart that day, and reach Taranto on July 1st.

From the 16th to the 20th of July, Trieste, Bolzano, Ascari, Corazziere, and the destroyer Carabiniere covered another fast convoy to Tripoli. On 22 August, Trieste sortied with other elements of the Italian fleet to try to locate Force H they returned to port four days later without success. In late September, the British sent another convoy to reinforce Malta, codenamed Operation Halberd.

The Italian fleet sortied on the 26th of September to try to intercept it, but broke off the operation upon discovering the strength of the British escort force. Trieste then took part in the Duisberg convoy on the 8–9th of November along with Trento, the two ships serving as the convoy’s covering force.

The convoy was attacked by British warships in the early hours of the 9th of November, the covering force failed to intervene and the convoy was completely destroyed.

Trieste escorted another convoy to Libya on the 21st of November in company with the light cruiser Duca degli Abruzzi.

Late that evening, the convoy came under a combined submarine and aircraft attack, Trieste was torpedoed by the submarine HMS Utmost, and a torpedo bomber hit Duca degli Abruzzi shortly thereafter.

The two damaged vessels were escorted back to Messina by the cruiser Giuseppe Garibaldi and the destroyer Bersagliere, arriving the next morning. After repairs were completed, Trieste joined Bolzano and Gorizia the only other surviving heavy cruisers in the fleet.

The ships sortied with eight destroyers on the 12th of August 1942, to try to intercept a British convoy. While turning back after the operation was cancelled, Bolzano and one of the destroyers were torpedoed by a British submarine.

Despite the Regia Marina having litle fuel at this point and being mostly bening to the Allied war effort, the US & British command felt it was still imprerative to neutralize as much of the Italian fleet as possible.

And on the 10th of April 1943, while moored in La Maddalena, Sardinia, Trieste came under attack from a squadron of 84 B-24 Liberator heavy bombers from the United States Army Air Forces.

Much of her crew was ashore participating in a football/soccer match with the crew from the other Italian cruiser, Gorizia. She received several hits and capsized to her starboard side and sank in the shallow water.

Harry Gillespie is a military historian who resides with his wife in the United Kingdom.

Battle of Taranto : The Battle that Changed Warfare

The Assault On Mount Kent : A Glorious Day for the SAS in the Falkands

Sinking Of HMS Royal Oak By U-47

The 2nd Bismarck Sinking Of WW2

Subscribe
Previous
Panzerschiff Admiral Graf Spee German Cruiser AKA The...
Next
Future of Mortgage Rates & US Real Estate with Hedge Fund...
Return to site
All Posts
×