As already planned, the German Imperial Navy requisitioned SMS Cap Trafalgar as an auxiliary cruiser. On the 18th of August she arrived in Montevideo for coal and then sailed to rendezvous at the remote Brazilian island of Trindade, 500 miles east of the Brazilian mainland, with the gunboat SMS Eber, which transferred naval officers, ammunition and armaments to the liner.

At the same time, her third funnel, which was a dummy, was removed.

She was armed with two 4.1 inch guns and six one-pounder pom-poms (named for the sound they made while firing), all manned by experienced naval personnel, and given the mission to sink British merchant shipping. She was given the codename Hilfskreuzer B (Auxiliary Cruiser B) and was commanded by Korvettenkapitän Wirth. After a fruitless initial cruise, Cap Trafalgar returned on 13 September to the secret supply base at Trindade Island to take on fuel from German colliers.

The RMS Carmania was a British ocean liner designed by Leonard Peskett and built by John Brown & Company for the Cunard Line. She was launched on 21 February 1905 and made her maiden voyage from Liverpool to New York on 2 December of the same year. Following the outbreak of World War I, Carmania was converted into an armed merchant cruiser, equipped with eight 4.7-inch guns, and put under the command of Captain Noel Grant. 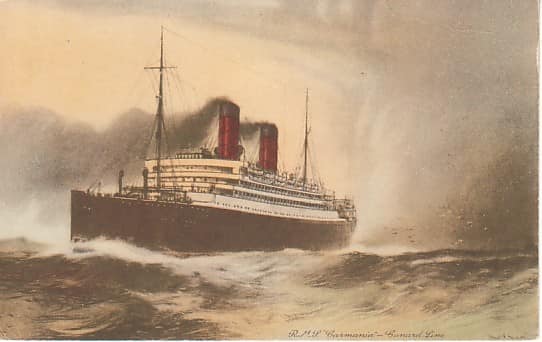 It was at this base on 14 September that Cap Trafalgar(above) was discovered by the Carmania which had been sent to flush out German colliers and small warships that might be using the inhospitable island as a base against British merchant shipping. Carmania spotted Cap Trafalgar’s smoke early in the morning and some hours later was able to surprise the German ship with two colliers in the island’s only harbour.

By coincidence, the Cap Trafalgar was disguised as the Carmania.

Both the captains of the Cap Trafalgar and the Carmania had realized that to fight a successful action, their respective vessels required plenty of room; so, the captains had separately steamed several miles from the outcrop of the Island of Trindade in order to gain the space required.

The Cap Trafalgar also sent out encoded German messages, announcing the engagement with the Carmania, and the position as 35 degrees west, 26 degrees south, with a North by NorthWest heading. Then the two ships turned towards each other and began to fight, the Carmania firing too early and thus allowing the Cap Trafalgar to land the first blow. Carmania fared worse than her opponent in the ensuing two hours battle being hit 79 times, was holed below the waterline, and had her bridge totally destroyed by shellfire.

However, as the range closed her own guns began to inflict damage, and fires broke out on both ships, sailors lining the rails and firing machine guns at their opposite numbers as the ships came within a few hundred yards of each other.

Neither ship had the fire control systems or ammunition hoists of a modern warship, so the action was fought in the style of Nelson’s day, with ammunition being brought to the guns by hand and the guns firing as the target bore.

Just as it seemed that the fires on Carmania would burn out of control, Cap Trafalgar veered away, lowering lifeboats as she heeled over to port. A shell below the waterline had ruptured several compartments, and the ship was rapidly sinking, although the colliers were able to pull 279 sailors from the wreck before she sank. Fifty-one were killed in the fighting or the sinking, including Captain Wirth.

Carmania was equally shattered, listing severely, heavily flooded and burning, with nine men dead and many more wounded. It was at this point that Cap Trafalgar’s contemporary, the armed merchant cruiser SS Kronprinz Wilhelm arrived, seemingly to provide the coup de grace for the shattered ship.

However, the Kronprinz Wilhelm’s captain feared a trap, since many ships both German and Allied in the area had doubtless been listening to the SOS calls of the Cap Trafalgar, which, though in German code, had been supplemented by messages from the Carmania with the British code. Since multiple warships were on their way to the location, and the Cap Trafalgar had presumably already sunk, the captain of the Kronprinz Wilhelm turned his ship about and sailed away without firing a shot. 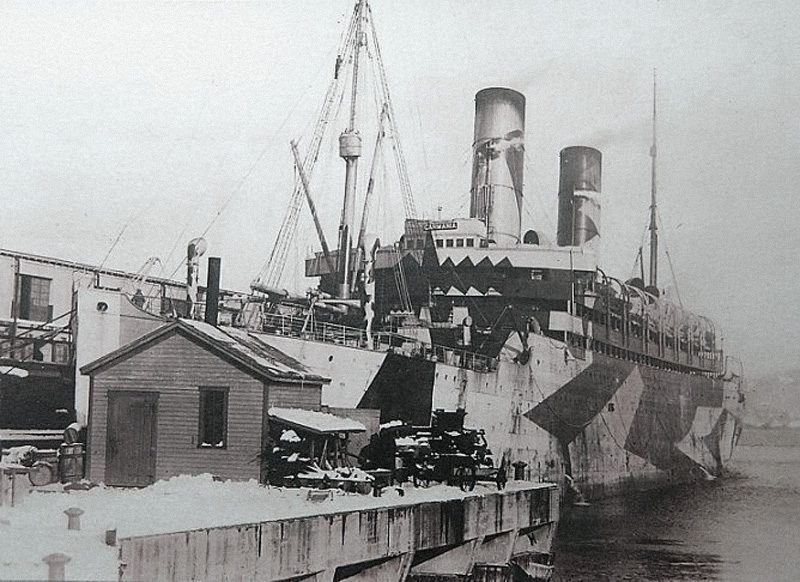 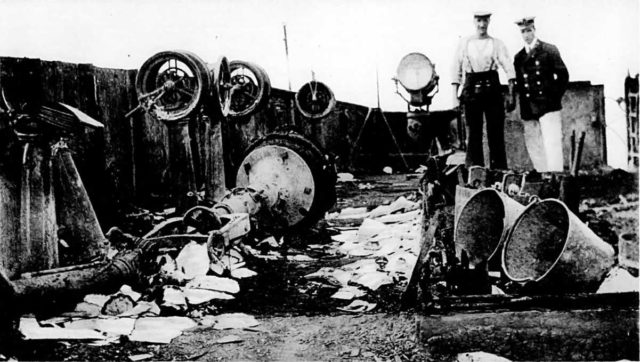 The Carmania was barely afloat. She listed severely as fires burned and the communication and navigation equipment on her bridge were almost destroyed. She turned away and sped south, hoping to rendezvous with a British cruiser in the area.

By the time she was rescued on the 15th, she was hardly seaworthy and most likely would have sunk if at sea for more than another day or two.

The following day the Carmania was rescued and brought into Pernambuco by other units of the Royal Navy, whilst the survivors of the Cap Trafalgar were rescued by the collier Eleonore Woermann and taken to Buenos Aires. Most were interned for the duration of the war on the Argentine island of Martín García.